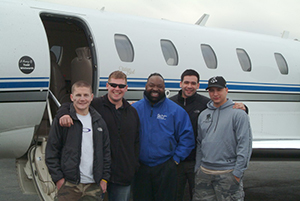 WASHINGTON, D.C. — Earlier in February, three wounded veterans traveled from Washington, DC to Meridian, Miss. to speak to a troop of soon-to-be deployed Marines. The veterans traveled free of charge courtesy of Window World, Inc.®, America’s largest replacement window company. Although this was the 23rd trip supported by Window World, it was the first mission that was sponsored by a local store owner. Greg Deathridge, owner of Window World stores in Washington, DC, Las Vegas, Bakersfield, Calif., Fresno, Calif. and Central Valley-Waynesboro, Va., contributed funding for the aircraft and pilot to make the trip possible.

The Veterans Airlift Command (VAC) is a non-profit organization that facilitates free air transportation to wounded warriors, veterans and their families for medical and other compassionate purposes, through a national network of volunteer aircraft owners and pilots. Window World has been sponsoring missions for the VAC since 2008.

“All of these veterans have sacrificed so much to defend our country and we are honored to give this back to them,” Deathridge said. “My staff and I were all overwhelmed with emotions upon meeting these gentlemen and watching them board the aircraft. We’re so proud to be a part of a company that cares about our community and helping those who truly deserve it.”

Kyle Carpenter, Dominic Davila and Rory Hamil were the veterans who were transported on this mission. Carpenter was serving in Afghanistan when he was hit by an enemy grenade in 2010. He heroically threw himself on the grenade to shield his fellow Marine, losing his right eye and suffering other severe injuries in the process. Davila had his right leg amputated below the knee as a result of an insurgent bombing in Afghanistan in 2009. Hamil lost his right leg in 2011 after stepping on an explosive pressure plate in Afghanistan. Fellow Marine William Romero was also on the flight.

“It was an honor to meet these four veterans and shake their hands and personally thank them for their sacrifice,” said Ken Farren, a member of the sales staff at Window World of Central Valley “It’s the least we could do to honor them.”

In addition to supporting veteran missions, Window World Cares has also dedicated a custom chopper built by Orange County Choppers to the VAC. The bike was built in 2011 and was featured on Discovery Channel’s hit primetime television show “American Choppers” on February 27.

About Window World, Inc.®:
Window World, Inc.®, headquartered in North Wilkesboro, N.C., is America’s largest replacement window company with stores and offices in more than 200 cities nationwide. Founded in 1995 and led by CEO Tammy Whitworth, the company consistently delivers value to homeowners by combining quality windows, siding and doors with excellent service at low prices. An ENERGY STAR® retail partner, Window World sells and installs more than one million high-quality residential replacement windows annually and has earned the Good Housekeeping Seal of Approval four years in a row. Through a brand and design partnership with Kathy Ireland, the company offers an assortment of windows, siding and door collections exclusively by kathy ireland Home® by Window World. For more information, visit www.WindowWorld.com or call 1-800-NEXT-WINDOW.

About Veterans Airlift Command:
The VAC facilitates free private air transportation to wounded warriors, veterans and their families for medical and other compassionate purposes. All flights are made available through a national network of volunteer aircraft owners and pilots. To learn more about the Veterans Airlift Command, visit www.VeteransAirlift.org.